We're installing a new kitchen.  The other one kept falling to pieces.  We got sick of random doors and drawers falling apart.

So we have braved Ikea flat packs, and have been pleasantly surprised with how good the quality is, and how well it is coming together.  Largely due to the planning and mathematical abilities of Husband.

We have just installed a brand spanking new oven, which appears to be far more intelligent than I am. 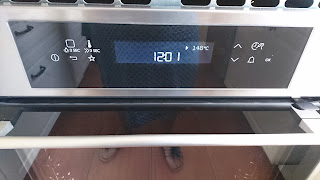 I must make sure I don't lose the instruction manual.

I am very excited about the fact that this oven will clean itself.  Which will vastly increase the amount of times any oven I own gets cleaned (it's not hard to improve on zero).

In decided the best way to "christen" a new oven would be to do some scrumptious baking. I was reminded of my new favourite cookbook:  Special Delivery by Annabel Crabb, by the person who gave it to me ;) - that would be an awesome place to begin.

As I was browsing for inspiration, I had the increased excitement of discovering it's actually a signed edition.  I nearly squealed out loud.  For other Chat 10 looks 3 listeners, you know what I mean when I say I can never chuck it now!

I've decided that the recipes are so wonderful that I shall make it my aim to bake my way through them.  I'm hoping my on-line partner-in-crime Sarah is going to assist with this.

For today's adventure, I stuck with a nice simple recipe for which I actually had the ingredients, was Cranberry Anzac Biscuits, with cranberries, "Cranzacs" - as suggested by Crabb.

I needed to Thermomixify the recipe, as we currently have no cook-top for the fun part of mixing the bicarb with the liquids.

And because I'm lazy.

So here goes with my version of it:

Dry ingredients (except the bicarb):  5 seconds, reverse speed, scrape down, then repeat.

Decant into another bowl. 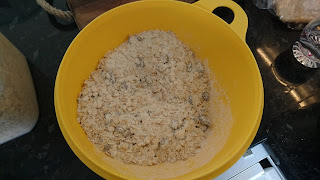 Butter & Golden Syrup - randomly guess at appropriate length of time & heat for this (too lazy to look up similar recipes online); ended up being a couple of minutes at 70 C - probably could have gone hotter & quicker than this, but hey, I was attempting to clean up the kitchen at the same time! 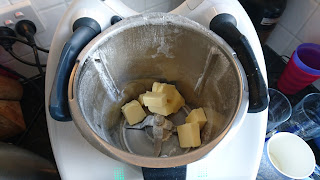 Add the bicarb mix.  Giggle at the bubbly fun & stir thru the dry ingredients.

Followed instructions as per Crabb, allowing plenty of spreading room around each biscuit.

They were lovely, quite sweet Anzacs.

I would even reduce the sugar a little in these, but that might mess up the chemistry of the crispy/chewiness of the biscuits, and I know nothing about that side of things. Unlike Annabel's description, that the biscuits are for a flat, crisp Anzac, mine were a bit doughier.  On handling the mixture, I didn't think they were holding together as well as I expected - I needed to use my hands to make the biscuit balls, so perhaps my golden syrup & butter quantities were a bit under? 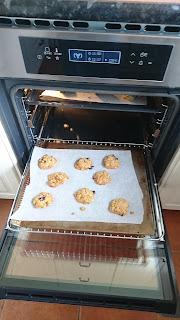 Telescopic arms on the oven racks.  Love this feature.

Instead I'll work on perfecting my technique.  Such a shame that I'll have to keep on baking these until I get them right ;)

I think I may have discovered that I might be an Anzac purist, because although these were lovely, I think I prefer my Anzacs without cranberries.  But hey, that won't stop me from wolfing them down. And cranberries count as fruit right? 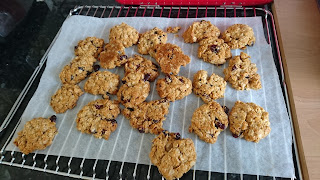