When he was 1 year old exactly (I wouldn't allow him to undergo anaesthesia before then) Dude had eye surgery.

It was an amazing process (when I look back at it).  Dude was in and out of that surgery in a couple of hours, we were home that afternoon, and he was up and playing later on.  I gave him panadol because I felt sorry for him, but honestly, he didn't need it.  The Specialist had told me that the recovery would be this quick, as he was so young, but I didn't believe it until I saw it.

At the time, it was, understandably, a tad distressing.  And this was only minor surgery, with known good outcomes, and a rapid recovery.

I can't imagine what parents go through who watch their children through major surgeries, and medical treatments.  My heart goes out to them.

His Paediatric Opthalmologist recommended surgery to correct the turn in both of his eyes.

This guy really knows his stuff.  Anyone ever needing a recommendation, get in touch - although he seems to be known all across Sydney as the go-to guy.  He looks a little like a mad professor, and he is truly lovely.

At the age of 3 months we realised Dude had a turn in his eye, and our GP was on to it straight away.  I am so thankful!  With the magic worked by our mad professor, he had a script worked out, and glasses on our guy at 4 months of age. 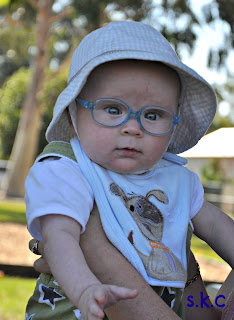 I will never forget the day we put the glasses on him!  There were mama tears.  It's always overwhelming to be confronted with any disabilities or struggles your child faces, even when they're minor.  I cried in the Optometrist shop that day, while the assistants and other shoppers cooed over my precious baby in his glasses.  I still feel emotional when I look back at the baby photos.

But the drive home - wow!  He was enthralled by everything.  I will never forget the way I could tell that he could was gazing in wonder at this world around him.  He was spellbound.

Anyway, back to the story.

Due the kindness of the fantastic Red Cross Trauma Teddy Organisation, Dude was given a Trauma Teddy and Certificate of Bravery after his surgery. 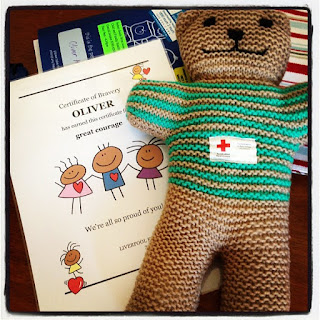 Over time, it became his "Teddy" (we're not very creative with toy names in our house), his Lovey that goes with him everywhere and without which he can't sleep.

As a result, he's become very loved.  aka Worn Out.

It reminds me of that beautiful quote from the Velveteen Rabbit. 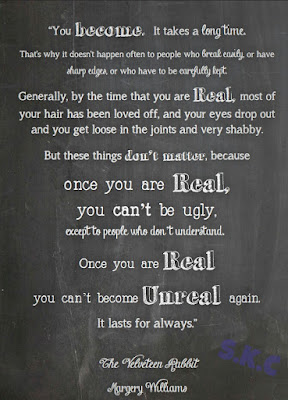 We have been pondering what to do about the problem of our beloved Teddy not lasting the distance.

I asked around to see if someone would knit one for us, that matched exactly.  Then I realised that as I can knit (at least the basics) I should have a go.

So off we went for wool.  Instead of choosing matching colours, Dude insisted on his favourite colour orange.  So we opted for that, and have named this the Practice Teddy. I plan to make him at least one more that matches the original.  I think Dude plans for a large family of teddies.

I don't think I can bear (no pun intended) to knit with this wool again.  It was the cheapest wool that matched the colour, at Spotlight.  I'm hoping to use Bendigo Wool for T.3, but that will depend on whether Dude minds about colours or not....

I found the pattern for the Trauma Teddies here - along with information that is necessary if you wish to make them to donate to this awesome cause.  It was lovely to see that the idea originated in our local area.

It's really a very simple pattern - if you can cast on, knit and cast off, you can manage this.
The organisations even accept the knitted teddy without it being constructed if you aren't confident to stuff the bear & sew him up.
We managed ok, although I think he looks a bit weird! The ears look more like cat ears than our original teddy's ears.

The one Dude was originally given was beautifully constructed.  I'm not sure if they had shaped the ears differently to the pattern or if they were just an expert teddy-creator.

I was most nervous about attempting the embroidery for the face, as I'm terrible at that type of thing.

I had a look at the original teddy, and followed the instructions (which are for safety reasons), and it wasn't so bad - it was very simple.

The kids declared that I had done a good job.  That's the best kind of praise.

I really don't think that T.2 is going to replace the original Teddy, but so far, Dude is very attached to him.  However I often find him tossed on the floor in the night, with T.1 maintaining his rightful place.