Finally some sewing... and it's for boys!

A certain boy is having a birthday soon, and when I was reliably informed that the only thing he wanted was more Nerf guns and bullets (of which he has an abundance already) I set about seeking inspiration.

What's most likely to limit the capabilities of an intrepid Nerf-gunner?

Running out of ammunition!

I found a great tutorial on making an Ammunition Holster here, and then proceeded to adapt it to my resources.

I have a self-imposed rule that any of my crazy projects have to utilise fabric I already own.  Because I have an awful lot sitting there waiting for those special creations! 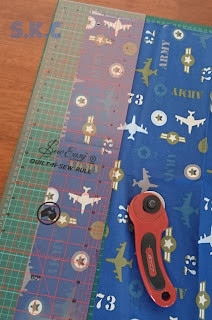 I cut two strips, approx 44 in x 4 inches - to allow for a slightly bigger boy than the original,
this was also the width of the fabric - less cutting = less time.
(I only had an hour to get this done)

I used two narrow pieces of fabric (instead of 1 wider strip) to make up for the lightweight fabric I wanted to use on the front.

I had some mad felt kind of thing that I thought would be stronger and grip well to our Nerf-gunner's clothes, making Nerf bullets all the more easy to access & reload.

The next problem to solve was the complete lack of Nerf darts in our house.  Luckily a kind friend came to the rescue and loaned me some.

I have to confess I have a secret love of Nerf guns - how fun are they!  I cannot wait until they are a part of the play-ware in our house.   But I do realise that I will be forever picking up nerf bullets.

Or maybe I could come up with a cunning plan in which I take them ransom and kids have to pay to get them back?
Or maybe I could make my children Nerf Dart Holsters, and they'll always be put away ready for the next ambush?  Who am I kidding!

I had to make another departure from the original tutorial.

My fabric was lightweight and wasn't going to maintain its shape against the elastic.  I needed the stability of the backing as well.  So I joined the two before I attached the elastic.

Before this, there was another key step.

Let me tell you how much I hate pinning* things. It's fiddly, it never seems to work well for me and it slows me down.  I may also be Lazy**.

Before I attached the two strips I drew a line running along the length of the front strip.  I have a fabulous tailors chalk mechanical pencil, which means you can mark accurately. 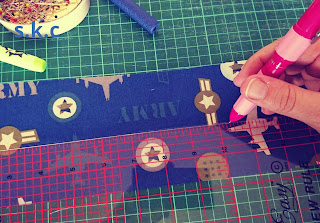 This was so I could line up the lower edge of the elastic to keep it straight along the whole strip.  Without pinning**. 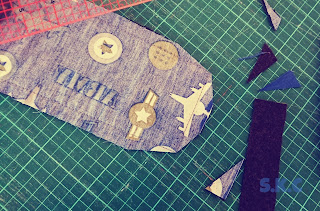 I sewed the strips right sides together, trimmed corners (to remove bulk) and folded in the flaps at the open end. 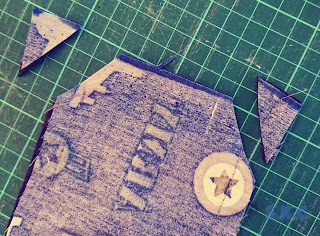 I ironed them. Ironing makes everything better when you sew. I promise you. It is always worth it

Then I topstitched (sewing on the top) the opening closed and continued all the way around the strip. I think topstitching always makes things look better. 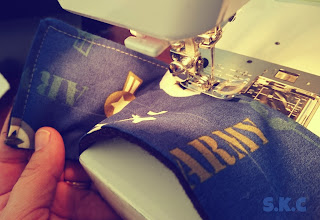 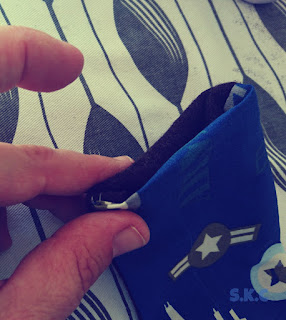 On the front of the outer fabric I attempted to use the Nerf bullets (loaned from a kind friend) to measure the size of the elastic loops.  I really did try to pin*, as I knew there was a lot of potential for everything to go crooked, and end badly.  When this didn't work, I used the 1 inch allowance from the tutorial.  I marked the elastic at 1 inch intervals so I would know where to sew. 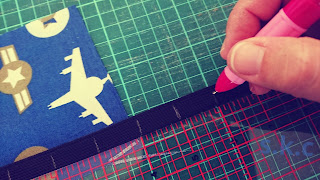 I anchored the end of the elastic (wrong side up, only a tail over the fabric strip, ie the main part hanging down away from the fabric).

Then I flipped the elastic back across the fabric, ready to be attached.

I attached the elastic at every inch, approx 6/8 of an inch along the fabric.  I didn't measure, just created a bit of a bump with the elastic. 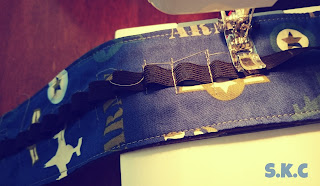 Once I had enough loops for the holster, I trimmed the remaining elastic off, tucked the end under, and secured with a triple stitch. 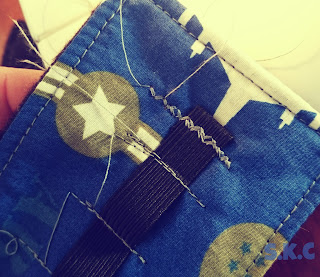 If I make one of these again, I'll do it differently.  I'll mark the elastic (at 1 inch) and the fabric (at 6/8 inch).  Then I sew do this in one continuous boxy zigzag, rotating the holster around as I sew.  This would look better, be stronger, and also mean I didn't have to spend a good hour snipping the ends**.  Luckily this was a pleasant way of passing the time at swimming lessons....

I joined the two ends of the holster, with a triple stitch (nice and strong). 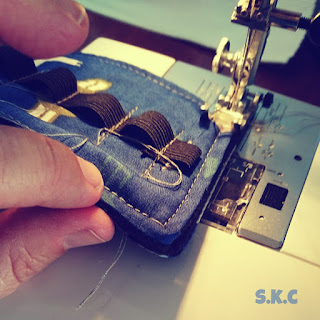 A matching ammunition satchel-belt was also made.  I would have loved to explain it to you, but it was late, and I was tired, and running out of time...  It has a belt clip for easy removal.  Nerf-boy promptly declared it a Nerf-gun holster.

The birthday boy was pretty happy, and willingly modeled his new gear. 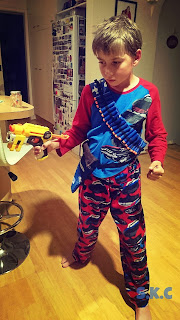 It brings me such joy when something I create for someone is going to be enjoyed by them (because I often have doubts that I'm going to hit the target - no pun intended). 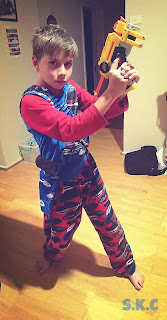 *I usually avoid pinning things at all costs.  It takes extra time, and that's just asking too much of me if I can possibly get away without it.  I really did try for this project, knowing how hard it would be to keep the elastic straight, but it wasn't working.  Hence the lines instead.

** In case you hadn't figured it out already this is not a blog for sewists*** . While I did use my mum's sewing machine as a kid, I never learned any of the correct ways to do things. I remember my pathetic attempts in textiles that were met with disdain by the teacher.  It has taken me years to realise the voice in my head saying I shouldn't see things because I'm no good at it is a load of baloney.  I'm not a technical sewist. I sew to make things people enjoy. Sometimes I've even designed them myself.  And I've learned to work around my limitations (straight lines anyone?) or improve with the practice.  I also take shortcuts wherever possible.  Some may call this lazy.

***you read 'sewer' and see what it says, sewists is much better