I have only ever once tried to make fudge.

It was a dismal failure.

So I gave up on that.

10 years later, now owning a Thermomix, and often being the recipient of someone else's yummy fudge, I decided it was time to conquer my fears and try again.

A box of fudge seemed the perfect accompaniment for a brief holiday with friends by the water.

So I tried again.  My only problem was finding a recipe that was constituted from ingredients that were in our house.  I did try to go shopping with an actual shopping list.  But I still managed to forget important fudgy components.

I followed the recipe carefully, even milling the sugar an extra 2 times to avoid any grittiness as mentioned in the reviews.  Everything was in:  the condensed milk, the vanilla, and the butter.  Oh, the butter!

But I forgot to check my golden syrup supplies.  Golden Syrup is just always there when you need it, surely?  Even my trusty neighbours had run out.

It was too late to back out, so I had to find Plan B

After watching the merest dribble of syrup fail to meet the requisite amount, I searched the pantry.  The best thing I could find was Pomegranate Molasses.  I bought this for something important I had planned and never gotten around to.  I too find it incredible that there was no golden syrup, but pomegranate molasses were in stock.

I hoped it would have a great flavour, and the same gooey consistency.  I thought I'd better taste test first - it's quite tangy, so I wasn't entirely confident.  But then I figured there was already enough sugar in the mixture to make this work.  It also isn't gooey like golden syrup.

The recipe tastes AMAZING!!  But I wouldn't call it a fudge.  The texture is more like a caramel, perhaps because of the consistency of the molasses vs the golden syrup.  It is incredibly moreish.  It is sweet and yummy, and the pomegranate molasses give it a tangy juicy quality.

If you're up for some experimenting and have the patience to cut the caramel up (it does require  commitment - thank you Husband) I can recommend you try this.  It keeps best in the fridge, and is just divine with a cup of tea! 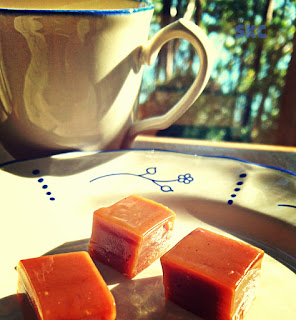