Things I've Learned from Committing to Run Every Day

Here are some random things I've learned from committing to Run Every Day, for the awesome cause of Alzheimers Australia.

Feel free to pop over here, if you'd love to donate to research into Dementia, or if you want to know more about why I did it, go here or here.

1. My body works better when I'm moving
2. My mood is consistently much better
3. I have heaps more energy throughout the day
4. I get a lot done when I come back energised from the run 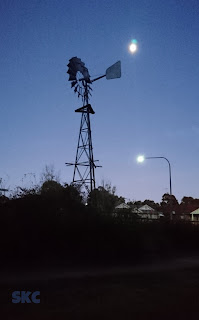 5. Getting up early grants me the gift of being awake in the loveliest time of the day, and seeing my suburb clothed in quiet beauty
6. Getting up early is hard (for me)
7. Getting up early is harder when I drink wine (the night before, clearly I don't try drinking at 5.30 am)
8. Getting up early is even harder when I read my book too late at night.
9. It's best to go for a run before I think about going for a run.
9. Getting up early is a great time to run:  the mornings are fresh, the roads are clear -  it's a great time of solitude
10. Getting up early means I can go for a run, and then have some precious quiet moments before the children started talking.  See here
11. Making a commitment to others, and having them pay money (OK not to me, but still, they paid money) for me to do it, made me do my best to stick to my promise, even when normally I would have blown off the run with "too tired" or "too busy". Only a genuine excuse could cut it (see below)
12. My friends are gracious - it was OK when I really was too sick to run.  They even crowd-sourced their metres & kilometres for me.
13. My friends are awesome:  lots of people decided they would join me in solidarity.
14. We were all making a great investment in our health & fitness
15. My husband is awesome.  I was running Super Early because he leaves for work Very Early (every single day), but on the mornings when I was running a bit late (ha! pun!) he deferred his leaving time for me to fit in my run.
16. It's still dark Super Early. I was glad to have this great led belt that flashes so I can be seen.
17. The first kilometre is the hardest.  And the second (kidding)
18. Hills are hard.
19. Little steps get you up hills.  There's probably some nifty meme-worthy life lessons in that.
20. Coming down hills makes going up the hills worth it
21. My Puppy is great company on our run.  He bounds about like a muppet for about the first kilometre.  Actually, for the whole run.
22. My Puppy is ready for another run straight away.  When I go to put his leash away he gets all excited thinking it's another run.  I like his attitude.  I don't share it.
23. My Puppy is much more calm and well-behaved with getting exercise every day.
24. My body isn't made for Running Every Day - I seemed to get heavier and slower as the month wore on.  But that's not to say I won't aim to keep Exercising Every Day in the Early Mornings.  Edit:  But then I got a bit fitter after the slow time.  So it's worth hanging in there. 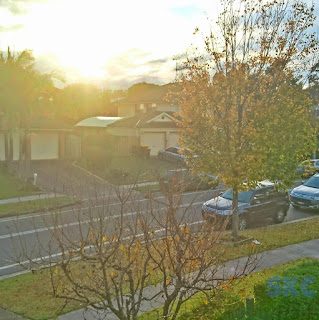 25.  It was a great opportunity to re-set my body clock and my routines
26. A cup of tea is the best way to reward myself after a run.  I love tea.
27. Two cups of tea is even better. Especially if no one is awake and talking to me.
28.  My fitness did improve.  Even though I couldn't see much change day to day, I found I was better able to manage longer runs.
29.  Endorphins rock.  How else can you explain this demented behaviour?
30. Autumn leaves glow in the lightening dawn.
31.  Running has made my world bigger.  The dark of winter can leave us feeling shut in, as if our life has grown smaller, when you leave home in the dark, and get home in the dark with little time for anything else.  Even though I was running in the dark, it made the day seem bigger and longer because I was out in life, living.
32. There's no bonus points for being a martyr about getting out early to run.  Loads of people are up getting ready for the day at this hour.  I only once saw any runners though!
33.  It was really easy to lose my new habit again, really fast, despite how awesome it felt to be living my new routine, sickness interrupted and I had to re-set.  But it was a little easier starting again.
34. Pilates was the best therapy for tight muscles.  I am incredibly thankful for 253Global. Penny is truly gifted!
35. I need more music on my playlist.  Any suggestions?

I am simply thrilled by how much money I was able to raise for Alzheimers Australia.

Thank you to all those people who encouraged me, ran in solidarity and donated to an awesome cause!

I recommend you try it too!